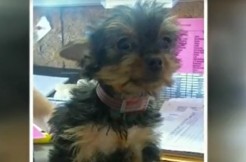 Police nabbed an alleged thief, but they can’t find the Yorkshire terrier they say he stole from a Florida pet shop on Jan. 12.

Wayne Junior Barfield was caught on surveillance footage at All About Puppies hiding the pup in his shirt, according to cops. The doggie was only 9 weeks old and has a special diet, needing feedings every three to four hours to fight hypoglycemia:

“I am so scared for this Yorkie. She is so young and so tiny,” the store’s kennel manager Bridget Royal told WFLA. “I don’t know what could happen to her. I’m so worried. I have no idea what this guy is going to do with her or if he’s even going to take care of her.”

Detectives said they learned that Barfield traded the terrier for crack cocaine and money, but not with whom. Though now behind bars, Barfield refused to say who now had the pup, police said. Fortunately, the dog is microchipped, so here’s hoping this helps authorities find her.

Barfield was charged with grand theft, and planted at the Pinellas County jail.