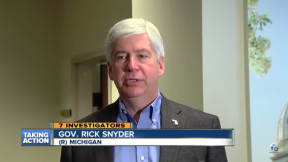 Public safety is the primary goal of every governor. The actions of Michigan Governor Rick Snyder show a willful disregard for the health of Flint’s denizens. Unfortunately, Gov. Synder is unlikely to face any criminal charges as he is protected by the immunity of his position; however, his immunity is not absolute and he is already a named defendant in multiple civil suits.

A class-action lawsuit filed by Flint residents against Gov. Snyder, additional public officials, and local government agencies alleges that the state Department of Environmental Quality was not treating the Flint River water with anti-corrosive agents, in violation of federal law (which the EPA is now investigating).

As details of Gov. Snyder’s role in overseeing the management of this crisis continue to emerge, criminal charges may become a possibility. If the Governor was the CEO of a company, or an individual physically dumping poison into the Flint River, he would face criminal charges. Such action is what Gov. Snyder’s willful ignorance amounts to.

Michigan State Attorney General Bill Schuette, the state’s top legal official, said he will investigate whether any Michigan laws have been violated as the notorious, industrial Michigan town grapples with the disastrous toxic lead contamination in its drinking water.

Let us not forget, this crisis is the result of a financial emergency whereby the state took over the city’s budget. The decision was a temporary cost saving measure that the State failed to follow-up on, or protect against. Soon after, residents complained that the water looked and smelled bad.

In July 2015, more than a year after Flint switched its water supply, Gov. Snyder’s chief of staff, Dennis Muchmore, emailed the state health department expressing frustration with the water issue, even saying, “I really don’t think people are getting the benefit of the doubt.” As Flint citizens grew more concerned about lead level studies, Gov. Snyder’s right hand acknowledged their concern.

In August 2015, evidence began to surface that lead levels in the blood of the children of Flint were rising. And here is the part where Gov. Snyder could be in legal trouble: With lead levels rising, Gov. Snyder waited until October to switch Flint’s water source away from the corrosive Flint River. That’s nearly three months after knowing about a potential problem. When dealing with human life, specifically that of children, time is of the essence.  This is further proof which could potentially lead investigators onto a criminal path.

Gov. Snyder has insisted that he did not initially know the severity of the water situation in Flint. However, it’s his job to know and he should be held to the highest standard where human lives are at stake.

In this case, Gov. Snyder knowingly created this danger and was negligent, or at least willfully ignorant, in his follow-up. Thousands of Flint residents have been unnecessarily injured by this man-made crisis because the the State of Michigan failed to take action.

The people of Michigan deserve better.