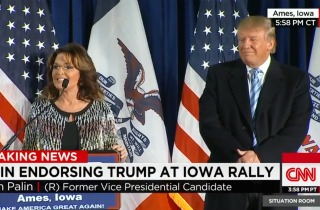 Sarah Palin is back in full form. During Tuesday night’s endorsement of Donald Trump, she minced no words, in only the way she can, taking shot after shot at President Obama and putting the full momentum of her popularity behind The Donald. But one thing she continues to harp on is that ‘illegal’ immigrants in the US are treated better than Americans. From a legal stand point, that is just not true.

“I think in Iowa, you are ready to see that our veterans are treated better than illegal immigrants are treated in this country,” Palin said to the revved up crowd on Tuesday night.

And this is not the first time she’s brought this point up. In fact, Donald Trump repeated the same message not too long ago. One of Palin’s main concerns is that these undocumented immigrants “are receiving better health care and more benefits than our troops.”

Certainly, it is true, the U.S. Department of Veteran Affairs is an administrative mess making it hard for some veterans to gain access to the care they deserve — but the bottom line is that very few states even allow undocumented immigrants to receive any benefits whatsoever.

In fact, under federally funded programs, undocumented immigrants are barred from receiving Medicare, Medicaid, welfare, food stamps and SSI payments. Under the 1996 Personal Responsibility and Work Opportunity Act – even legal permanent residents are prohibited from receiving these benefits until they’ve been in the U.S for at least 5 years.

As for Obamacare, no access for them there either. “Undocumented immigrants aren’t eligible to buy health coverage through the Marketplace. They’re not eligible for premium tax credits or other savings on Marketplace plans,” the federal government’s own website reads.

So what benefits do undocumented immigrants receive?

So, strictly from a legal standpoint, you can see, undocumented immigrants are just not treated better under the law than Americans or veterans, who are entitled to a large array of services including disability and healthcare.  As far as federal law is concerned, they are barred from getting just about anything from the government.