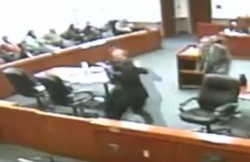 A defendant, just convicted for child molestation, took his anger out on the prosecutor who convicted him. Talk about occupational hazards.

Michael Cox, 31, had been just found guilty for criminal sexual contact for touching a young girl. So I guess he decided to tack on another charge onto his record. When Deputy District Attorney Scot Key was walking to the bench for a sidebar, Cox ran up and blindsided him.

Just about everybody in the courtroom jumped out of their seats, even the judge. Cox was pulled back, and the prosecutor apparently wanted to return the attack in kind. Officer KaeDea Smith managed to take Cox down.

“I was able to get a hold of the defendant and use the least amount of force possible to go ahead and detain him to get him under control,” said Smith. The local Sheriff’s office is reviewing the tapes to see what other charges Cox might have face in the future.

Cox hasn’t been sentenced yet for criminal sexual contact, but that charge can net at least a 3 year sentence in New Mexico.