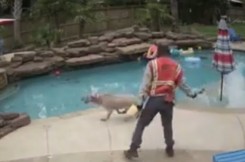 In shocking surveillance footage, an energy company contractor hit two dogs with a wrench at a Texas backyard. His company, Star Corp, claimed it was in self-defense, but the dogs’ owner, Mike Willcox, said the man was completely out of line.

Willcox said the contractor was disconnecting their gas service for alleged nonpayment, but didn’t notify homeowners before the altercation. A spokesperson for CenterPoint Energy, which was contracting Star Corp, confirmed to ABC 7 that employees don’t have to knock on people’s doors prior to turning off service.

But Star Corp took a different tack. They said the dogs were unleashed only after the contractor allegedly told Willcox he’d be turning off the gas.

“Once you use those pets as a weapon to hurt somebody, they’re not family pets anymore,” Star Corp owner David Mimun told KHOU. “They’re actually vicious animals.”

Willcox said that was patently untrue, and he said surveillance footage proved it. You can also see the disturbing video here, edited by the dogs’ family. Alleged injuries are listed, including a concussion, a damaged eye, and a lost tooth:

The available footage does not show the contractor talking to the homeowners prior to the altercation with the canines.

CenterPoint said it’s reviewing its practices, and will discuss this with the contractor, who has reportedly been suspended. They told ABC 7 that company policy is for employees to retreat in front of an allegedly dangerous animal, and to avoid striking it under any circumstance.

Vet bills amount to about $2000, with one of the dogs needing jaw surgery. Willcox told ABC 7 that CenterPoint called him Monday, offering to pay the costs.

The Houston Police Department are investigating the March 23 incident. In Texas, cruelty to non-livestock animals can net perpetrators two years behind bars.