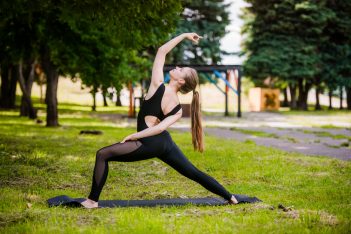 A Rhode Island man claims he has received death threats after writing a letter to the editor of his local newspaper last week detailing his complaints with women wearing yoga pants in public.  A protest march has also reportedly been scheduled for Sunday in response to the letter.

Alan Sorrentino wrote a letter to the editor of the of the Barrington Times newspaper on Wednesday expressing his displeasure with women wearing yoga pants in public.

“The absolute worst thing to ever happen in women fashion is the recent development of yoga pants as daily wear outside the yoga studio,” Sorrentino wrote.  He flatly suggested that women over the age of 20-years-old should never wear them in public and worried about what the fashion trend may lead to next.

“Yoga pants belong in the yoga studio,” Sorrentino opined. “What’s next? Wearing a “Speedo” to the supermarket? Imagine if men did that. Yuck!”

As one can probably imagine, the letter received quite a bit of backlash.  In fact, a group of women organized a gathering via Facebook for Sunday afternoon that appears to include a march down Sorrentino’s street:

Let’s take a leisurely walk through the neighborhood wearing our most comfortable pair of yoga pants!

This is NOT a hateful protest against Alan. This a wonderful group of people celebrating our bodies and our right to cover them however we see fit. And while yoga pants seem to be a silly thing to fight for, they are representative of something much bigger – Misogyny and the history of men policing womens bodies.

During an interview about the letter on Saturday with local radio station WPRO, Sorrentino said he wrote the letter as a joke to try to provide some humor in amid all the contentious letters he had been reading about the election.  He also expressed concern about the reaction some have had to his letter, telling the interviewer he has even received death threats.  Sorrentino said he was aware of the planned march and he pleaded with protesters to please stay away from his home.

However, it appears as though the protest is going forward.  A local news report captured video from the scene and posted it on Twitter moments ago: