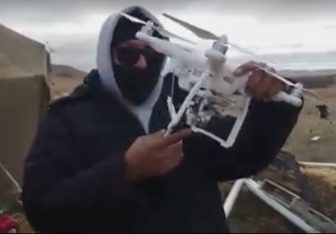 Law enforcement officers shot down a drone operated by activists on Sunday near the site of ongoing protests at the Dakota Access pipeline construction project in North Dakota.

The drone flew in a threatening manner towards a police helicopter that was assisting in surveillance of the protest, according to a statement from the Morton County Sheriff’s Department.  “A sheriff on board the helicopter reported to law enforcement on the ground that the helicopter pilot and passengers were ‘in fear of their lives’, and that the ‘drone came after us,’” the statement reads.

Activists posted a video of what appears to be the damaged drone on Facebook on Sunday afternoon.