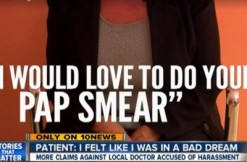 The story broke when a woman identified as “Michelle” made her claim in an April 8 report by ABC 10. She told the network that her doctor at Graybill Medical in San Marcos, Dr. Manuel Tanguma, made a bunch of advances to her starting in her first visit in July 2013. He allegedly told her she was beautiful, said she made him feel like “I’m in high school,” and in the most striking allegation, whipped out his penis and asked her to touch it. She’s a widow in her 70s.

Now three other women have approached ABC 10, saying Tanguma made similar advances toward them.

A woman identified as Melissa told the network that he asked her questions about her sex life during a January 2015 visit. She said he offered to do her pap smear, with what she called “loud and clear” sexual innuendo.

“With hands like this, I would love to do your breast exam,” Melissa said, claiming to quote Tanguma. She ended up filing a complaint with California’s medical board.

Kimberly told ABC 10 she initially went to Tanguma to address a serious medical issue. In a claim similar to Michelle’s, she said sat down at his office during her last visit, whipped out his penis, “and proceeded to sit there with his legs spread eagle, touching it and moving it around.”

She said she continued to visit him for years only because she worried he’d stop her treatment. She alleged that his bad behavior continued.

“You just block everything out and become numb to it,” she said.

The third woman was not quoted by ABC 10.

“Their stories are similar,” Pride told ABC 10 about their sources. “They were there for serious medical conditions. The facts do suggest Dr. Tanguma was picking women in a vulnerable state.”

The medical board filed a second case for a fifth woman, with a hearing scheduled for July. This will determine if he will keep his medical license.

Graybill Medical confirmed to ABC 10 that Tanguma resigned from the healthcare provider in November 2015. According to reports obtained by the network, Tangumma now works at North County Health Services, which promised to release a statement.

Tanguma did not respond to ABC 10’s request for comment.