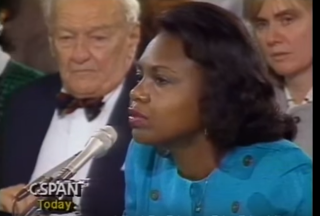 HBO’s ‘Confirmation’ starring Kerry Washington is renewing interest in Anita Hill‘s testimony from the 1991 confirmation hearing of Justice Clarence Thomas. The televised Senate hearings captured the nation’s interest as Hill described in very graphic details her time working for Thomas at the United States Department of Education. She alleged that Thomas made unwanted and very sexual advances towards her including describing the size of his penis, and his penchant for pornography.  Thomas always denied the events occurred and even addressed the controversy in a recent book.

Here is an excerpt from Hill’s testimony:

His conversations were very vivid. He spoke about acts that he had seen in pornographic films involving such matters as women having sex with animals and films showing group sex or rape scenes. He talked about pornographic materials depicting individuals with large penises or large breasts involved in various sex acts. On several occasions, Thomas told me graphically of his own sexual prowess

Here is the original video from the Senate hearings: