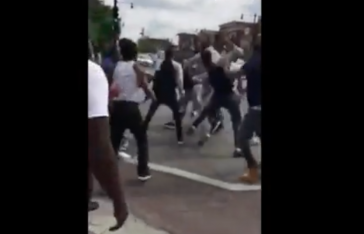 A video posted to Facebook on Monday shows a large brawl spill out into a busy intersection, all in front of a Chicago cop who appears to do little to stop it.

The fight occurred at the intersection of West Jackson Boulevard and South Western Avenue on Monday afternoon, according to DNA Info.  Video shows what appears to be two fairly large groups of mostly males meeting in the middle of the intersection to duke it out.  In addition to the large brawl, two individuals are seen across the intersection fighting one on one.  Neither group of individuals seem to be concerned with the honking cars or the Chicago police cruiser sitting in the intersection as all of this goes down.

While the officer does briefly use the cruiser megaphone to try to break up the brawl, he appears to do little else to stop the fighting.  Although, it is doubtful he could have done anything given the amount of people fighting. In fact, Chicago Police spokesman Frank Giancamilli basically said as much when asked about the incident on Monday

“CPD officers are training to assess and deescalate situations before they become a greater hazard to public safety, as well as the officers involved,” Giancamilli said to DNA Info. “In this instance, the officer awaited additional units before intervening.”

Giancamilli added the department has already increased patrols in the area around the intersection since Monday.

The owner of a shop at the same intersection reportedly said several bike cops arrived on scene after the fight was mostly over.  He also said about 60 people were involved and he believed it was gang related.

“This could’ve been very serious,” the shop owner said. “This is what happens. It’s a turf war.”