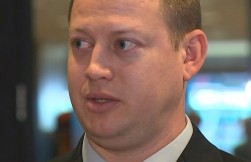 I bet your family dynamic isn’t as awkward as this: A Texas man was found not guilty of stealing his daughter’s cell phone. Of course his ex was his accuser.

Ronald Jackson, 36, says he was just disciplining his 12-year-old daughter in Sept. 2013, when he’d found inappropriate texts on her cell phone. Inappropriate texts by a teenager? How awful and unexpected! Pop took his daughter’s phone as punishment.

But the child’s mother, Michelle Steppe, was having none of that. “As a mom, I’m upset because, number one, the property belongs to me,” she said, according to KHOU.

So Steppe called the police on her ex, Jackson (FYI, they were never married). Grand Prairie police showed up at his home, demanding back his daughter’s iPhone 4.

Jackson refused. “At that point, I decided the police don’t interfere with my ability to parent my daughter,” he said. Pop was so adamant he turned down a plea deal, and demanded a jury trial in municipal court.

And he won. Jurors found him not guilty Tuesday, which utterly confused Steppe.

“Even if you purchase something with your own money and have a receipt, it’s not yours,” Steppe says, clearly frustrated. “Someone can take it from you.”

Jackson still has the phone, and this tale may still continue. His attorney, Cameron Gray, plans on filing a federal complaint for civil rights violations. He says Jackson was mistreated by the Grand Prairie Police Department and the city attorney’s office.

“I have to separate myself from them,” Jackson said about his ex and child. “I can’t ever have a relationship with them again.”