Anti-Gay Judge Who Hung Hitler Pic May Be Forced Out 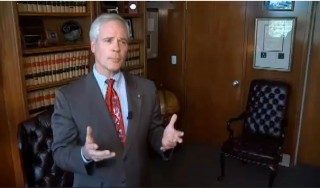 Earlier this week, the Oregon Commission on Judicial Fitness and Disability unanimously recommended that Judge Vance Day be removed from office. The decision follows a two-week hearing last November. Day faced 13 ethics charges; the recommendation for removal is based on eight of them with the remaining five dismissed. It is now up to the Oregon Supreme Court whether to follow the Commission’s recommendation.

In its 48-page decision, the Commission explained several specific instances of willful misconduct before concluding that: “Judge Day’s behavior indicates that he has little insight concerning the boundaries required in a judicial position. In fact, much of Judge Day’s conduct violated common sense restrictions prescribed by the very nature of the judiciary.
According to the Commission, the violations included Judge Day’s solicitation of funds from attorneys for his “Hall of Heroes”—a collection of World War II artwork hung on the courthouse walls. He asked for money to mat and frame some of the artwork. One work was a collage that contained a portrait of Hitler; Judge Day eventually took down that piece.

Judge Day refused to perform same-sex marriages for a period of five months in 2014. The Commission found that he told his staff to tell same-sex couples he was unavailable.

Judge Day committed misconduct, according to the Commission, when he allowed a former Navy SEAL, on felony probation through Veterans Treatment Court, to handle a gun. He asked the Navy SEAL, identified as BAS in the report, to instruct his son in the proper handling of a firearm. BAS was not supposed to handle firearms as a condition of his active supervised probation. This occurred on two occasions, according to the report: November 18, 2013 and January 12, 2014.

The Commission found that Judge Day abused his judicial power for personal gain when he confronted a referee at his son’s soccer game in 2012. The referee felt threatened by the judge.

“Judge Day shows no outward sign of comprehending the extent or nature of his ethical violations,” the commission wrote. “His misconduct is of such a nature as to impugn his honesty and integrity.”

Judge Day was appointed to the bench in 2011 and elected the following year. He serves in a courthouse in Salem, Oregon. It is unclear when the Oregon Supreme will render a decision on the Commission’s report and recommendation.