Man Accused of Planting Note on Plane Warning of Bomb 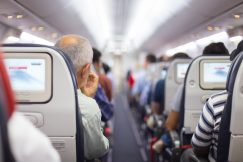 DENVER (AP) — An airline passenger has been arrested on charges of planting a note on a plane en route from San Diego to Denver that falsely claimed a bomb was on board.

Authorities said Wednesday that 20-year-old Cameron E. Korth of West Jordan, Utah, was arrested on a charge of maliciously conveying false information. It wasn’t immediately known if Korth had a lawyer who could speak on his behalf.

The hand-written note was found on United Airlines flight 231 Monday. Authorities say the plane landed safely in Denver and a search by police failed to find any explosives.

Prosecutors say Korth told the flight crew he found the note in an airplane lavatory, but investigators examined his handwriting and concluded he wrote it.

Korth was due in Denver federal court later Wednesday.