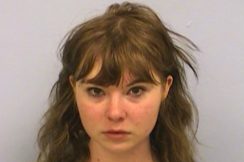 “Murder gives me a high unlike any other,” she wrote in a diary entry found by investigators. “It feels like this crisp unreality, flashing and sparkling, adrenaline and shock. Fight or flight mode. How do I even go about describing it. [sic] The whole thing was unreal. I’m so proud of myself.”

On Friday, a Travis County, Texas court sentenced Moen to 15 years in prison after she pleaded guilty to ambushing a women in Austin, stabbing her 21 times. Prosecutors say she has a history of drug use and mental issues.

The victim said it happened when she was laying back on a blanket outside. She told the American-Statement in 2015 that Moen was smiling during the attack.

Moen’s mother apologized for the incident during an interview with KXAN. She declined to appear on camera.

“It means a lot,” the victim told the outlet. “Because there was no remorse in the situation.” She said during the sentencing hearing on Friday that she was glad it happened to her, and not someone more vulnerable, like a child or elderly person.