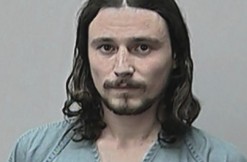 Beezow Doo-doo Zopittybop-bop-bop was arrested Sunday in Olympia, Washington. Go ahead, you can say his name to yourself. We’ll wait.

Zopittybop-bop-bop, who totally looks like Jesus Christ, is accused of fighting a police officer, according to Fox 5 Atlanta. It started when the arresting officer reportedly saw the suspect tear down flyers at Evergreen State College on Sunday.

Now take notes. This is textbook “escalation.” Police say Zopittybop-bop-bop ran from the officer, who eventually tackled him to the ground. Some fighting happened, where Zopittybop-bop-bop allegedly grabbed the cop’s gun, bit the cop’s finger, and attempted to stab the cop with a pen. The officer reportedly used his Taser several times, according to The Olympian.

Fox 23 reveals that Zopittybop-bop-bop’s legal name used to be Jeffrey Drew Wilschke, but he’d changed it in 2011.

Zopittybop-bop-bop was already kind of famous for a 2012 drug and weapons arrest because come on, how can that name not go viral?