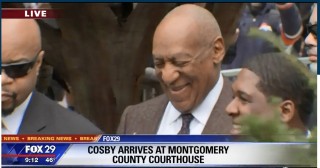 LawNewz.com’s Beth Karas is at Bill Cosby’s hearing in Pennsylvania. She contributed to this report.

Pennsylvania Judge Steven T O’Neill may decide soon on whether or not to dismiss the criminal case against Bill Cosby in Pennsylvania. Cosby’s attorneys contend that a promise not to prosecute by a former district attorney prevents the case from moving forward. Former Montgomery District Attorney, Bruce Castor, testified Tuesday that he didn’t think there was enough evidence to charge Cosby back in 2005. Cosby says he only waived his right not to incriminate himself during a civil deposition because of the alleged agreement. Andrea Constand says that Cosby raped and drugged her more than 10 years ago. She filed a lawsuit against him, and prosecutors want to use Cosby’s deposition in that case as evidence of the crime. Many courtroom observers are reporting that the judge may not be buying into the defense’s argument that the entire case should be thrown out because of this agreement.

Here are some indications from the judge that Cosby might NOT be off the hook yet:

Stay with LawNewz.com for coverage from the courtroom.

[h/t and screengrab Fox 29 in Philly]