White Supremacist Leaflets Call for Genocide of Muslims and Latinos 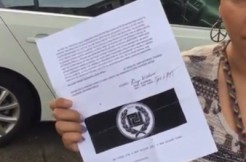 Police in Sacramento, California are looking for who made leaflets pushing for the genocide of Muslims and Latinos.

“If you have not secured a body dump-site, do so now!” one leaflet, obtained by the Sacramento Bee, reads. “Kidnap, rob, torture for information and execute all Muslims and Latinos. Leave no survivors.”

Denise Calderon told the Bee she discovered the leaflets on vehicles near her apartment, worrying about how many kids had read them.

“I’ve been living here six years,” she said. “We have all kinds of crazy, but this is a different level of crazy.”

The name “Greg Withrow” is signed off on the leaflets. That should sound familiar to anyone who has studied white supremacists in the United States. Born in 1961, he joined the Ku Klux Klan at age 14, and later broke off to become a prominent figure among white power skinheads. At the 1986 Aryan World Congress, he said “non-Aryan” people should either be kicked out of America or killed.

And this is where it gets strange because Withrow publicly repented only a few years later.

“It [speaking at a Jewish community center] scared me,” Withrow told The Los Angeles Times in 1989. “A man who fears begins to hate, and so it was like facing my greatest fear. I’ve never spoken to a group of Jews. But afterwards they gave me a standing applause….I would do it again just for the hugs.”

Then in 2005, Butte County sheriff’s deputies linked Withrow to hate literature spread throughout Paradise, California, the Bee reports. The paper tried and failed to reach him on Tuesday, and they said a phone number linked to him was disconnected.

Sacramento police could not confirm if he’d actually had a hand in the leaflets, and are still investigating.

[screengrab of Calderon holding a leaflet via The Sacramento Bee]
–