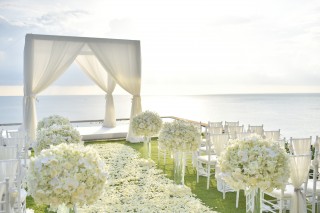 Rachel Halligan was getting ready to officiate a wedding in Huntsville, Alabama’s Big Spring Park, when she noticed something unusual. When she first arrived at 3:30 Saturday afternoon, a crowd was gathered by the park’s pond, and when she took a closer look, she saw there was a naked man in the water, AL.com reported.

According to Halligan, police had been trying to track down a man who had stolen a state flag. She believed that the red fabric that the nude man in the water was holding was indeed the missing flag. She said police caught up to him and surrounded the pond, but the naked fugitive wouldn’t give himself up.

Officers reportedly got in a boat and started chasing the man, who began splashing them, spitting water, throwing sticks, and waving what Halligan thought was the flag. When she left the park after the ceremony, an hour and a half later, police still hadn’t caught him. LawNewz.com reached out to the Huntsville police to see if an arrest had been made, but they have yet to respond.

The wedding itself was able to proceed, but the couple had to make some rearrangements so the pursuit wouldn’t be in the background of their pictures and video.