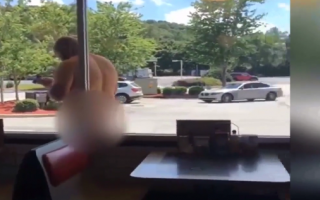 Diners at a Georgia waffle house got a surprise when a 36-year-old man showed up completely naked, WSB-TV reported. A patron of the restaurant recorded the man on video and uploaded it to Facebook before an employee called 911 and police prevented the nude visitor from entering the establishment.

Authorities apprehended the man in the parking lot and charged the man with indecent exposure. At the time, police had no idea why the man did this, although the witness who recorded the incident said he overheard the man complain that it was too hot outside.