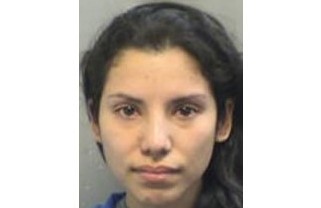 On Tuesday, a woman reportedly walked right into a Texas police station, holding a pair of knives above her head.

“The only other person inside the lobby area during this encounter was the front desk officer,” the Arlington Police Department said in a statement published Thursday. “The officer began giving commands to the woman to drop the knives.”

You can see it unfold here, in surveillance footage. Note that the video repeats twice, each time from a different angle.

A massive desk partition separated the two. According to the statement, the officer called for assistance (for obvious reasons), and told the woman to back up and drop the knives. She allegedly didn’t follow the directions, and kept menacing him, thrusting the knives through the air.

Several officers arrived, and they too told her to drop the knives, “but she would not drop the knives.” One cops tased her, and as seen on video, she fell down flat. No injuries were reported.

The woman, Patricia Sayan, is being charged with one count of Terroristic Threat, a misdemeanor. She remained in Arlington jail as of Thursday afternoon.
–