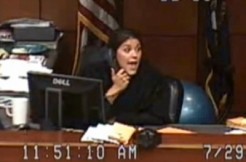 A Kentucky judge got a surprise Friday: A defendant who went to court without pants. The woman’s attorney claimed jail officials in Jefferson County wouldn’t give her a jumpsuit or feminine hygiene products, though she had been locked up for three days.

Though soft-spoken, Judge Amber Wolf was anything but pleased to hear this.

“Excuse me?” she said and immediately got on her phone to figure out what why this had happened.

“Am I in the twilight zone?” she said to herself. “What is happening?”

You can see the video, obtained by WDRB, below:

Eventually, she reached Metro Corrections Deputy Director Dwayne Clark, who got an earful.

Jail spokesman Steve Durham later told WDRB that all the rules had been followed.

“This is pretty standard that when individuals are arrested, they remain in the clothing that they’ve been arrested in, especially for the first 72 hours,” he said. Durham also claimed officials were looking into the allegation that inmates were not being given hygiene products. The woman’s attorney also alleged that inmates were being denied showers.

It’s pretty obvious that Wolf would think that rule needs some flexibility. In court, she told Clark she’d hold the defendant until court until some pants were delivered. “This is outrageous,” she said.

According to WDRD, Clark later said: “Dressed like she was, she should have been changed into a jumpsuit. I gotta look into why she wasn’t.”

Officials later brought the defendant a jumpsuit. She was later released from jail with time served and a $100 fine, according to WDRB. Wolf said she’d been in jail for too long: The defendant allegedly failed to complete a diversionary program for a first-time shoplifting charge. Certainly bad, but it should’ve only led to one day in lockup, not three.
–