VIDEO: Dad Allegedly Sold His Own Son for $1000 and a Pickup Truck 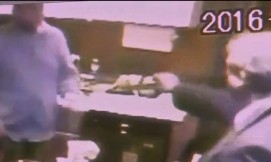 A father has actually been accused of trying to sell his son. Like chattel. Ronald Hoyt, 45, has been charged with the sale or purchase of a child, which is somehow just a third-degree felony there in Texas. Cops arrested him for the attempted barter Friday.

Hoyt’s son Alan Hoyt, 16, said he’s had problems with dad for years. “He made sure I knew I was adopted. There was a lot of bad stuff,” the kid said.

Fortunately, he met Michael Gonzales last year, who intervened, going to court and becoming Alan’s managing conservator (the legal guardian). Now they want to evolve that to full-on adoption. But the older Hoyt wouldn’t let his son go without a price.

Gonzalez reached police, and reportedly set up a sting operation with an undercover cop. Hoyt was allegedly caught on tape, and arrested.

When contacted by ABC Chicago, the older Hoyt denied the charges, and said he wouldn’t talk anymore without an attorney, of which he had none at the time. He faces up to 10 years in prison, and a fine of up to $10,000.