Business Partner of Teenage ‘Dr. Love’ Still Thinks He Might be a Real Doctor 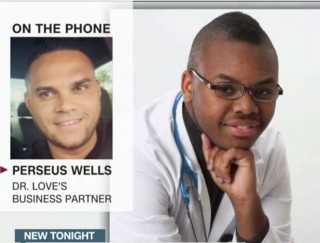 The business partner of the 18 year old arrested for practicing without a medical license called in to Dr. Drew’s show Monday afternoon. He told the T.V. host that he is unsure if Malachi Love-Robinson is a doctor, and said that Love-Robinson had provided him with certificates and transcripts. Seriously, he seemed very confused about the whole situation. Dr. Drew had to set him straight.

“He’s 18, it is impossible for him to get the sufficient training,” Dr. Drew said.

Love-Robinson – who has been referred to as ‘Dr. Love’ – was picked up at his Palm Beach Medical clinic by narcotics agents last week. In addition to practicing without a license, Robinson-Love is also accused of stealing thousands from an 86-year-old woman. Perseus Wells invested in his practice and said they had just opened up the doors to “New Birth New Life Medical Center and Urgent Care” about two weeks ago.

When Wells called into Dr. Drew’s show,  you can very clearly hear the panel of experts giggle throughout the entire phone interview. Here is some of the transcript.

Dr. Drew: Did you believe this young man was a physician?

Perseus Wells: At the time, yes.  He is accused of not being one. I still don’t know which is which is. Is it true?  Is it not true?

Dr. Drew:  Perseus, he’s 18, it is impossible to get the sufficient training, it takes 8 years to get your license, then you’ve got to do post grad training after that, so it’s just impossible to do it by 18….

Perseus Wells: Well, my idea with the whole situation was not investing in Malachi, I invested in the idea of a practice. We were determined to open a practice and hire and bring MD’s in. I don’t know anything about MD’s…. He told me he was a natural doctor. I don’t know anything about natural doctors and what they do, I just took him at his word after seeing all the certifications and his degrees from Arizona State, transcripts.

During a Good Morning America interview, Love-Robinson denied he pretended to be a medical doctor. Love-Robinson insisted he never told people he was an M.D, even though a taped-over sign at his West Palm Beach clinic stated that he was. He claims he only practiced alternative medicine, and had the proper licenses to do so.

[h/t and screen grab via HLN video above]