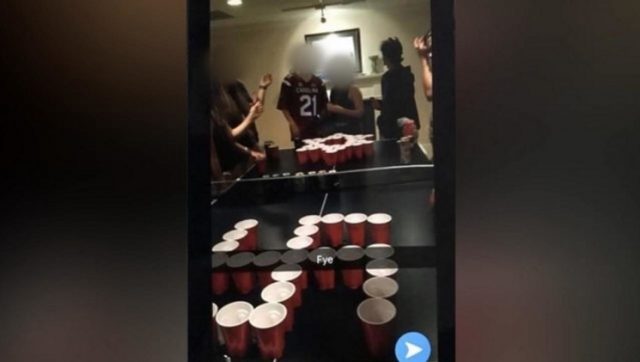 If you’re going to play a tone-deaf, Holocaust-themed game of beer pong you should probably make sure there’s no evidence–and definitely make sure any such evidence doesn’t end up on the internet.

Students at a private school in Atlanta are learning those lessons the hard way.

Days after their ill-advised Shoah-and-light beer festivities came to light, five students from The Lovett School were suspended.

The student who allegedly set up the game–with opposing sides using cups arranged in the shape of the Nazi swastika and the Jewish Star of David as targets–and who also apparently took the incriminating photo, was expelled.

Those disciplinary actions came after Rabbi Peter Berg alerted the school’s headmaster to the insensitive photograph and behavior, according to a local news station. How Berg came across the photograph is currently unclear.

This isn’t the first time The Lovett School has courted racially-charged controversy. Back in 1963, the non-denominational K-12 school once refused to integrate black students–including Martin Luther King III–a decision which prompted the school’s then headmaster to resign. Lovett finally integrated in 1967.

LawNewz reached out to The Lovett School’s Director of Communications, Courtney Fowler, to further clarify the situation. Fowler emailed the following statement in response:

“Two weeks ago, The Lovett School was made aware that several students, and students from other schools, were involved this summer in an off-campus incident with anti-Semitic overtones and other violations of Lovett’s character pledge and student handbook. The school pursued an immediate investigation, and significant responses – including disciplinary action and counseling – have been undertaken. Character education is at the heart of all we do at Lovett, and we deeply appreciate the individuals and organizations across our community who are helping us to continue to learn and grow from this very troubling incident.”