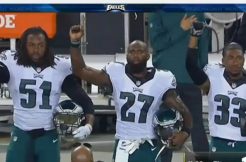 Belmont University announced that the student who made a violent, racist post on social media is no longer with the school. Here’s the deal. On Monday, three players for the Philadelphia Eagles, all black, raised their fists during the National Anthem at a game in Chicago. This apparently triggered someone who complained on Snapchat.

“Piece of s—t n—–s,” this person wrote. “Every one of them needs a damn bullet in their head. If you don’t like this county get the hell out.”

Well, Belmont, a private school in Tennessee, sent the following statements on Tuesday. The student, who remains unnamed in reports, is no longer there.

@ShaunKing After investigating the racist social media post, the person involved is no longer a student at Belmont. pic.twitter.com/0EVgExqMEy

The language is ambiguous, so it was not immediately clear if the student left voluntarily or was expelled. Also, King disputed the school’s claim:

Your statement is misleading @BelmontUniv. He was a student there this morning when you pulled him out of class. Students told me as much. https://t.co/K2zSUIqM7b

We reached out to Belmont for clarification, and the University confirmed that the student “did not leave on their own.”

The raised black power fists is a potent image in U.S. culture. Those Eagles players—cornerback Ron Brooks, safety Malcolm Jenkins, and defensive end Steven Means—seem to be echoing the protest of San Francisco 49ers quarterback Colin Kaepernick. He’s been kneeling during the Anthem in opposition to police brutality against people of color.

Update – 6:17 p.m.: Belmont University responded to our requests for comment, and we changed the article accordingly.
–