Someone Hung Giant Poster of Vladimir Putin From Manhattan Bridge 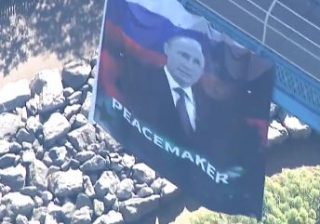 Some time Thursday afternoon, a large, mysterious banner featuring Russian president Vladimir Putin with the word “Peacemaker” on the bottom appeared on New York City’s Manhattan Bridge, looming over downtown Brooklyn. Images of the ominous emblem popped up on social media, with no explanation as to its origins or purpose. Where did it come from? What does it mean?

This just dropped on the Manhattan Bridge. Living in some weird and scary times. pic.twitter.com/ry9XvxBYcW

Witnesses eventually told the New York Post that they saw two individuals unfurl the flag at roughly 1:45pm. Someone finally called 911 at around 2:30, and police managed to remove the banner by 2:55.

The culprits are still at large, and their identities remain as hidden as their motives.