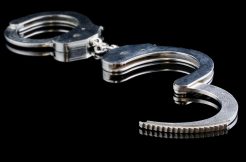 A 61-year-old man allegedly wrote ‘F—k Islam’ on a light pole. Only problem,  a police officer reportedly saw it happen. Vincent Casella was arrested on September 30 by police in Mount Vernon, New York, according to a report by The Journal News.

According to cops, Casella explained why he did it: he was worried about the nation’s direction, and, as the outlet phrased it, “too many terrorists were being allowed in.”

He has now been charged with third-degree criminal mischief (which is being treated as a felony hate crime) and unlawfully making graffiti, a misdemeanor. He was arraigned on October 3 and is now free, awaiting another court date.

We’ve reached out to the Mount Vernon Police Department for more information, and will update when we hear back.

[image via Hetman Bohdan and Shutterstock]
–