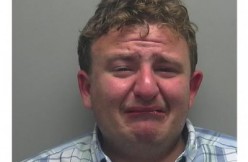 A Wisconsin man has gone viral in the worst way: He is visibly crying in his mugshot.

Anthony Zingale has been charged with first-degree sexual assault and carrying a concealed weapon. He tried to attack a woman during a house party, according to a criminal complaint obtained by CBS 58.

This guy allegedly busted into an unlocked bathroom while a woman was using the toilet. He allegedly brandished a knife, and had his pants and underwear down to his ankles. Zingale allegedly put the knife to her neck, demanding oral sex.

The alleged victim told police that in an effort to keep from getting stabbed, she convinced him to go to the bedroom.  She said he did this with the understanding they’d have sex. But she screamed when he entered the bedroom and husband arrived shortly after.

Zingale reportedly told police he only went into the bathroom because he urgently had to pee.