Prosecutor: Chef Made Food After Wiping Himself with Hands 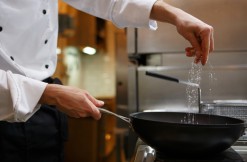 A chef in England recently pleaded guilty to ten charges of breaching food and hygiene regulations. Which is to say the man, Mahbub Chowdhury, 46, allegedly never used toilet paper while taking a dump.

On May 5, health code officials in Swindon investigated his restaurant, Yeahya Flavour of Asia, and found “very poor standards of hygiene,” according to prosecutor Rosie Heath. For example: a suspicious plastic milk bottle discovered under a double sink. It was covered with “brown fingerprints.”

“When asked, Mr. Chowdhury explained he filled the bottle with water from kitchen taps and used it to clean his bottom after visiting the toilet,” Heath said in court. She said Chowdhury admitted to never using toilet paper for “cultural reasons.” Investigators claimed the brown fingerprints were doo-doo.

Chowdhury’s attorney Mark Glendenning insisted in court that the brown marks “could have been spices.” He said his client no longer runs the restaurant, according to The Sun.

A sentencing hearing is pending.