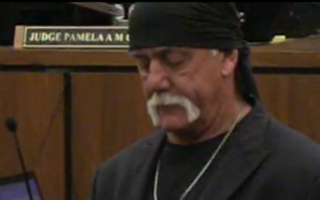 After Hulk Hogan won a massive $140 million verdict against Gawker for publishing excerpts of a sex tape he was in, the site and its founder, Nick Denton appealed the decision, claiming that the former wrestling star didn’t actually care about the sex tape. Gawker alleged that documents that were kept sealed during the trial indicated that Hogan, real name Terry Bollea, was more concerned that additional footage of him would leak, showing him making racially charged comments, including using the N-word regarding a man his daughter was dating.

Well, we now have audio of him making these types of statements to Heather Clem, Hogan’s co-star in the video.

Listen to the clip here (the important part starts at around the 1:10 mark):

According to Death and Taxes, this is a rough version of the transcript:

Hogan: I’m getting ready to cut some serious bait. [Inaudible] Brooke — my daughter, Brooke — [redacted], she jumped sides on me.

Hogan: ‘Cause I shelled out two, three million bucks for her music, and [inaudible] I’ve done everything. Fucking with him day and night on the radio like a jackass, and he’s working with me to make…make work [inaudible] when [inaudible] really should call it a day and do the shit I did.

Hogan: So it gets to the point where…I dunno if Brooke was fucking the black guy’s son, or they’ve been hanging out. I caught them holding hands together on the tour. They were getting close to kind of [inaudible] the fucking [inaudible]. I’m not a double standard type of guy. I’m a racist to a point, y’know, fucking niggers, but then, when it comes to nice people and [redacted]