Pregnant Woman Wins Legal Fight to Eat Her Own Placenta 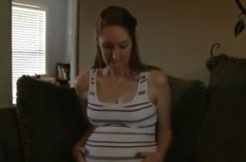 Did you know some animals eat the placenta after birth? This organ, which links fetus to mother, is purported to ease various postpartum health problems. Humans, who will try anything, have taken to making these into smoothies or pills. But what happens when a mother wants to try it out, but the hospital won’t let her?

Jordan Thiering just won a court order that will require her hospital to give her the placenta after her son’s birth. She was 33 weeks pregnant in the end of May.

“I grew my baby,” Jordan Thiering told The Clarion-Ledger. “I grew my placenta. There should be no one that can tell me what I can or can’t do with it.”

Thiering had been told she needed a court order to get her placenta back. A state memo obtained by the Clarion-Ledger confirmed that yep, afterbirth is considered medical waste in Mississippi, so women have to go through the court system to get back their own body parts.

Attorney Jacqueline Hammack contacted Thiering after she wrote about her plight on Facebook. A judge granted their petition on May 17, less than three weeks after they made it. Now they want the law to change.

“It’s not just about getting [Thiering’s] court order, but making it easier for other women,” Hammack said, according to The Clarion-Ledger. “I think if the Department of Health is amenable to changing it’s policy, I think we could change the way hospitals treat the issue.”

Thiering told WJTV she was apparently the first woman to successfully apply in-state to take back her own placenta.

In a statement to LawNewz.com, Hammack said they haven’t been able to schedule a meeting with officials since her client will soon give birth. Nonetheless, she plans on directly urging heath authorities to allow mothers to re-obtain their placentas without the need of a court order. She even started a mothers’ rights legal organization, Birth Justice.

“If our efforts with the DOH do not result in the change we desire, Mr. Thiering and I are both prepared to approach the legislature next year about changing the law,” she said.

Liz Sharlot, Communications Director for the Mississippi State Department of Health, told LawNewz.com that they are in the “preliminary stages” of discussing a policy change. This process will include surveying OB/GYNs.