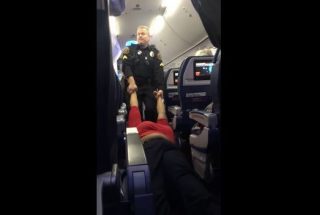 Good to see that officers at Detroit Metro Airport aren’t messing around. On Monday, Delta Airlines notified airport police regarding a passenger who allegedly didn’t follow baggage and boarding protocol. Delta told the cops that the passenger had to leave the plane, but when officers boarded, she wouldn’t listen, Delta Media Relations Manager Erica Donerson told WWJ Newsradio 950.

When the passenger allegedly refused to comply with officers’ demands, they physically dragged her down the aisle and off the plane. A fellow passenger recorded the ensuing incident, which was posted on the blog “Rene’s Points.” In the video, the woman does not appear to be fighting or cooperating. She doesn’t appear to be doing much of anything else, for that matter.

“Despite repeated requests by officers, the woman refused to leave the aircraft and had to be removed,” Donnerson said. “She was arrested and charges are pending.” Airline spokesman Anthony Black said the flight was only slightly delayed as a result of the commotion.