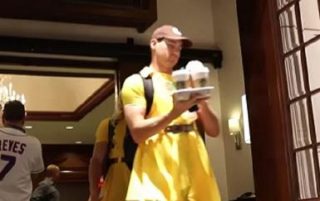 Major League Baseball and the MLB Players’ Association are set to ratify their new collective bargaining agreement on Tuesday. One piece in the new CBA is an Anti-Hazing and Anti-Bullying Policy. Among the behavior prohibited by the new policy is “requiring, coercing or encouraging” teammates to do things including “dressing up as women or wearing costumes that may be offensive to individuals based on their race, sex, nationality, age, sexual orientation, gender identity or other characteristic.”

The new rules were partly inspired by the publicizing of player rituals on social media. MLB Vice President Paul Mifsud told the Associated Press that the sharing of images and videos online “in our view sort of unfortunately publicized a lot of the dressing up of the players … those kind of things which in our view were insensitive and potentially offensive to a number of groups.” For example, he explained, “There’s lots of pictures of baseball players dressed up as Disney princesses.” Other costumes worn by players as part of hazing or initiation include Wonder Woman, Dallas Cowboys cheerleader, and Hooters waitress. New York Mets rookies once dressed up as players from the All-American Girls Professional Baseball League.

Really nice of the rookies to get up early this morning and get coffee for the vets. #StillBetterThanAAA #Mets pic.twitter.com/iODfwCC16K

Mifsud said that there are players who complained about these practices. The policy says it is meant “to prohibit conduct that may cause players physical anguish or harm, may be offensive to some players, club staff or fans, or are distracting to the operation of the club or MLB.”

Some players, however, see this sort of thing as a right of passage.

Seriously?! Had to wear a Hooters outfit going through customs in Toronto and wore it proudly bc I was in the Show. https://t.co/xswNVAOaKQ

Honored to be one of the last players ever to be dressed up as a woman pic.twitter.com/NenUSzBG6k

Regardless of the attitudes of current individual players, the league believes it is time to leave these practices in the past. Players Association attorney Dave Prouty agreed, saying, “Times have changed. There is certain conduct that we have to be conscious of.”