Parents of 14-Year-Old Sue, Say Daughter Bullied By ‘Dora the Explorer’ to Vape 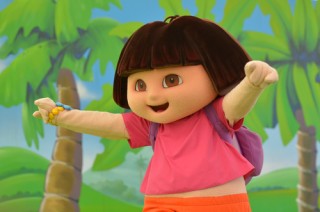 A lawsuit due in Manhattan Supreme Court next week is everything that’s wrong with the world today: teenagers refusing to take responsibility, e-cigarettes, and the new “preteen” Dora the Explorer.

At the center of Leonelli v. Avenues Global Holdings, LLC is a fourteen-year-old girl, (referred to as “M.S.” in the lawsuit), who was caught vaping in a bathroom at Avenues New York, an elite private school in Chelsea. M.S. responded with an argument that could only come from a 2016 teenager: “Dora the Explorer made me do it.” According to news coverage of the lawsuit, M.S. claimed that 15 year-old Fatima Ptacek (the actress who voices Dora), lured her into the bathroom, and browbeat her into smoking a vape pen. What constituted this “bullying”? Apparently, the TV-star allegedly called M.S. a “p***y” and as a result, M.S. felt too vulnerable to resist the intense pressure to break school rules.

M.S. was later reportedly expelled from the $40,000-a-year school – a consequence that didn’t sit well with her parents. According to the NY Post, Judith Fox, the division head at Avenues, defended the expulsion, saying: “the goal of the disciplinary measures at Avenues New York is to restore a student to good citizenship by having the student be honest, own his or her mistakes, take responsibility for his or her own actions, and focus on his or her own behavior, not the behavior of other students.”

It sure sounds like M.S. learned her pass-the-buck skills from her parents, who are now suing the school to recover their tuition payment and legal fees. Their argument is that it’s Fatima Ptacek who should bear the real consequences, but that the school gave Fatima the special celebrity treatment by merely suspending her for three days.

I’m so annoyed by everything about this lawsuit that it’s tough to know just where to begin. The only thing lamer than getting suspended for sucking on something that looks like a highlighter marker is claiming that Dora made you do it.

Actual bullying is a serious problem with serious consequences. Our kids who are truly being victimized need us to do all we can to protect them.   But telling someone to try smoking in the girls’ room is now what it’s always been: typical teen behavior. This isn’t bullying. Characterizing an incident like this as bullying reverses the important work so many child protective advocates are doing to keep our kids safe and secure. And while I wouldn’t exactly be shocked if I learned that this Dora chick had acted like a classic Mean Girl, I don’t want to hear how it’s her fault unless she literally forced M.S. to put the vape pen in her mouth. Otherwise, this is called “peer pressure” and M.S. may want to consider toughening up a bit.

I get that the family is pretty annoyed about losing 40 grand in tuition payments because their kid broke the rules. Expulsion does sound extreme.  But hey, buy the ticket, take the ride; if you pay $40,000 to send your kid to a fancy school so that she can avoid the public-school riff-raff, don’t be annoyed when your kid gets booted for actually being the riff-raff.

If the plaintiffs are looking for creative legal angles, they may want to try a contractual version of the “affluenza defense” – that M.S. couldn’t follow the rules, because she’s emotionally unequipped to do so. Even better might be an argument that M.S.’ behavior was predictable, and therefore, was a foundational assumption of the parties’ contractual relationship. After decades of dealing with entitled teens and their enabling parents, Avenues must have known that teens breaking rules and blaming others for doing so is simply part of the equation.