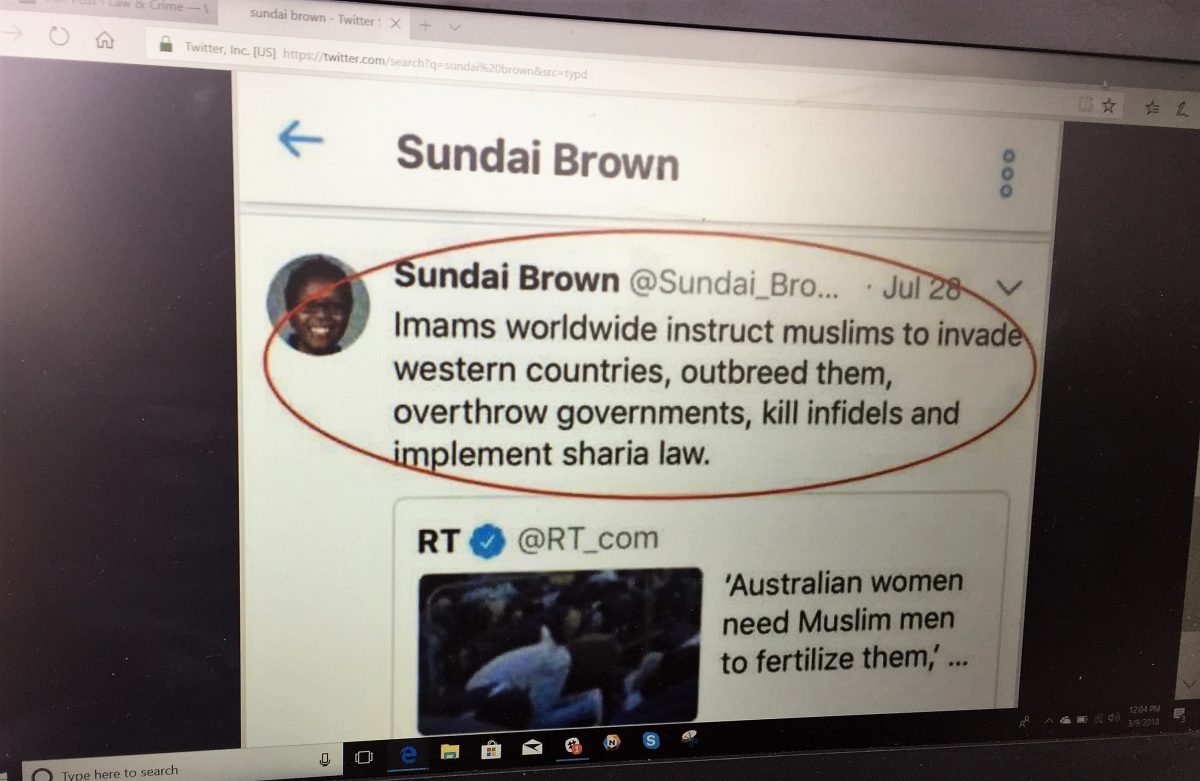 An African-American teacher in Florida is facing a lot of heat right now after tweeting anti-Muslim rhetoric, including that from an alleged white supremacist group. The teacher, Sundai Brown, apparently retweeted a post from “Identity Evropa,” which calls itself a group “for people of European heritage,” the Orlando Sentinel reported, citing screen shots of the purported tweet being re-circulated on Twitter. Law&Crime could not independently confirm the tweets because the associated account appears to have been taken down.

Other Twitter comments being attributed to Brown via screen shots include statements such as, “Imams worldwide instruct muslims to invade western countries, outbreed them, overthrow governments, kill infidels and implement sharia law,” the Sentinel reported. Another said, “If you think Hurricane Irma is bad, wait till you get a load of Hurricane Allah. We have to stop Islam, or say goodbye to civilization,” Orlando Weekly pointed out.

Brown is reportedly a social studies teacher, though the school’s Web site lists her as a “gifted” teacher. She remains employed with the district, the Sentinel said. The school’s principal apparently responded by sending an all-call phone message to parents about the controversy, which said, in part, that administrators had “addressed these concerns with the teacher at the time,” but that “the school district does not condone or interfere in social media posts of employees unless there is a violation of the professional code of ethics.”

A Law&Crime search of the district’s Web site could not easily locate a “professional code of ethics” document. The local school board policies which deal with ethics largely surround lobbying, political activities, and the securing of contracts. The policies surrounding political activities and political speech make it clear that the district cannot infringe the speech rights of employees, but can restrict employees from using their official positions to endorse certain views. Though the Twitter account purportedly registered to Brown has since disappeared, an archived version of the account contains this profile information:

Teacher and lover of the Declaration of Independence and all of our founding documents, especially the Constitution of the United States of America. United States.

It will be interesting to see whether the description of herself as “teacher” on the account is legal grounds for personnel action.

Law&Crime emailed the teacher for a response. If one is forthcoming, we will update this post.