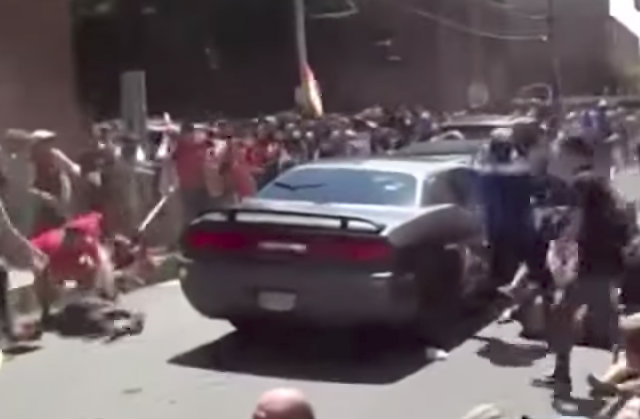 A Kentucky cop has been suspended without pay for making fun of the fatal incident that left one woman dead during a white supremacist rally. Morris Rinehardt, who works for the Shively Police Department, will be off the job for eight days, according to a WDRB report.

“The City of Shively and its police department take this type of act very seriously,” said a statement from cops. “This behavior is in no way condoned and cannot be ignored.” The Assistant Police Chief, Lt. Col. Josh Myers, said  this is Rinehardt’s first infraction.

A white supremacist rally in Charlottesville, Virginia erupted in violence on August 12. Dozens of people were injured, and one woman, 32-year-old Heather Heyer, was killed when a car drove into a crowd of anti-racist counter-protesters. Police arrested James Alex Fields Jr., the driver of a Dodge Challenger, for doing this on purpose.

As first reported by The Courier Journal, Rinehardt posted a picture of the Challenger to Facebook. It featured obvious damage to the front of the car. Text was superimposed on the image: “When you were born a Challenger but identify as a Ram.” He wrote “LMFAO” in response to another user’s post of a joke advertisement for the vehicle.

Police announced on August 14 that they placed Rinehardt on paid administrative leave. His Facebook account is currently offline.

[Screengrab via Inside Edition]