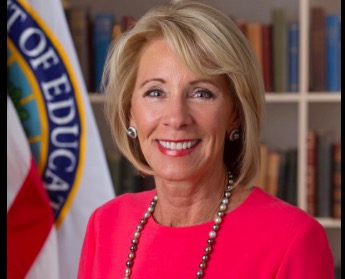 DeVos articulated the need for a system in which “the rights of all parties must be taken into account,” and that, “acts of sexual misconduct are reprehensible, disgusting, and unacceptable.” All true, and well-said. Brava, Betsy. I’ll give credit where it’s due—it’s nice to see someone in this administration say the right thing at the right time.

She also said a few things that were predictably tone-deaf. DeVos accused the Obama Administration of “weaponizing” the Office of Civil Rights to “work against schools and against students,” and remarked that “a system biased toward finding a student responsible for sexual misconduct is also committing discrimination.” DeVos also went on a bit of a tirade against schools who employ such a broad definition of “sexual assault” that students and faculty alike are punished “simply for speaking their minds or teaching their classes.”

These remarks, of course, were well-crafted to resonate with DeVos’ supporters. By reframing the problem of campus rape as suppression of speech, or by recasting victims as the schools themselves (many of which have been found liable for truly atrocious handling of campus rapes), DeVos has changed the conversation to suit her political needs. In another political climate, maligning the Office of Civil Rights would itself be cause for serious suspicion; now, though, up is down, shields are swords, and civil rights are leftist propaganda. These, of course, are ideological divides that will give rise to debates for years to come, and they’ll take someone far more Solomonesque than Betsy DeVos to settle.

Nestled in there, though, between the wise-sounding calls for due process and the blame for the prior administration, is something deeply problematic: proof that Betsy DeVos does not understand the law. At all.

DeVos advocated for the use of a “Regional Center model” for campus sexual assaults. Such a system would ostensibly outsource the investigation and adjudication of campus sex crimes (no word yet on the criteria, staffing, or funding for such centers, or for the fate of the current Title IX infrastructure on our campuses). The benefit of such a system, according to DeVos, is that using professionally-trained experts, “insures that students are not charged by school-based tribunals on the basis of hearsay or incomplete evidence.”

Such promises may play well for those whose understanding of the justice system is a by-product of Law & Order marathons, but for those of us with burdens of proof as the tools of our trade, this smacks of inexperience. You see, people accused of sexual assault are not “victims of hearsay,” and it is not completeness of evidence that is relevant, but rather, fairness, reliability, and admissibility.

What DeVos meant was that it is unfair for a student to be thrown out of school based on what might be a false accusation of sexual misconduct. The inference from this talk of evidence is that now that Betsy is in town, a student should only face serious university consequences after it has been proven beyond a reasonable doubt that the student is actually at fault.  The current system for which DeVos has obvious disdain, requires a lesser evidentiary standard.  The only problem is that our justice system doesn’t quite work the way DeVos is promising. It’s not “reasonable doubt or bust.”

In the American legal system, we use different standards of proof and different evidentiary rules for different types of proceedings. Collectively, we operate under the principle that with the exception of being executed, going to jail is pretty much the worst consequence a person can face. That’s why criminal convictions require the state to prove guilt “beyond a reasonable doubt.” We don’t use that standard because it’s “the best,” we use it because it corresponds to what is at stake.   Similarly, we use the lower standard of “preponderance of the evidence” when money is at stake in a civil case. Money is lower on the priority list than freedom, so civil cases involving only money use that lower burden or proof. Some civil cases, such as those that terminate parental rights or other quasi-criminal proceedings use the higher standard of “clear and convincing evidence,” – more than a typical civil case, less than a criminal one.  As devastating as it may be for a student to face university consequences, campus disciplinary proceedings and criminal trials are two very different things.

It’s not just that the two systems differ, Mr. Graff explained, but that a quest for identical procedural due process could potentially risk the underlying purpose of Title IX:

“While the rules of evidence may serve as a guide in conducting campus sexual assault proceedings – to help develop some structure – tying institutions to the rules of evidence or criminal trial standards likely would impede them from doing the very thing Title IX requires: maintaining a learning environment and opportunities equally accessible to the genders.”

And when it comes to campus sexual assault, that lack of equality transcends quickly into lack of safety. Mr. Graff continued, “[schools] would effectively be prohibited from acting to remove an individual from a community where a fair reading of the information available supports the reasonable conclusion that one person has violated another.”  While DeVos’ quest for better due process for those accused of sex crimes may be well-intentioned, it’s ill-informed.

Furthermore, Betsy is also likely unaware that in our legal system, there are plenty of times when hearsay evidence is not only admissible, but also the basis of very serious consequences. For example, hearsay is admissible in some child-protective proceedings (including child sex-abuse cases), where the standard of proof is the same “preponderance of the evidence” used on college campuses. In those cases, parents stand to lose custody of their children, and have their parental rights permanently affected. Hearsay, a legal term with a complex definition, isn’t a word to throw around as an example of how those accused of campus rape are today’s most needy victims. I applaud DeVos’ stated goal – to improve a relatively new system of handling an epidemic of crimes that are extraordinarily difficult to investigate and adjudicate. I’ll stand with DeVos, or anyone else who wishes to educate campus officials about procedural fairness, the impact of bias, or proportionality of punishment.   But if our secretary of education is going to revamp the implementation of federal law on our campuses, it would be a great idea if she learned a little about how law actually works.