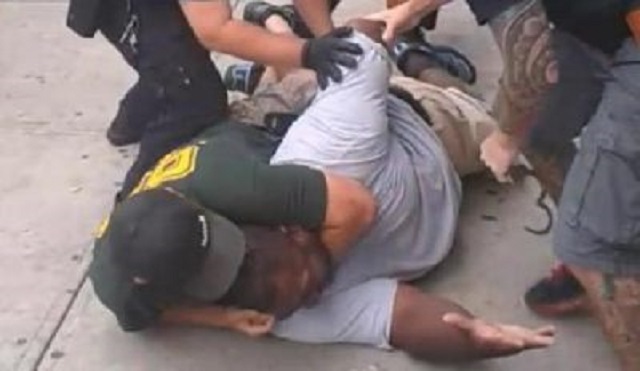 The police department responsible for choking Eric Garner to death after he allegedly sold some cigarettes on a street corner–and which eventually arrested the man who filmed Garner’s final moments–has apparently developed a new way to make sure such incidents don’t occur in the future.

Not incidents of police brutality itself–just your ability to see them on YouTube.

According to a report released this morning by New York City’s Civilian Complaint Review Board (CCRB), NYPD officers frequently knock phones out of peoples’ hands when they attempt to record their interactions with law enforcement.

From 2014 through 2016, the CCRB received 346 allegations of police interference with civilian recording efforts. The city watchdog, which is the largest police oversight organization in the country, was able to independently verify 96 such allegations out of the 346 made–or 28% total, the report says.

As for the rest of the complaints, 52% were lacking enough evidence for the board to make an accurate determination; 11% of reported incidents occurred but were found to be “lawful” and another six percent were determined to not have occurred at all.

Police interference with video recording is typically seen as an infringement of videographers’ First Amendment rights, but in some circumstances the CCRB found a legal justification due to safety concerns or because the person making the video was the one being arrested in the first place.

Technology has greatly increased civilians’ ability to record and share video of police
encounters—as is their First Amendment right. This has increased transparency and debate about safe and fair policing. As these recordings become more prevalent, our police force must be prepared for the profound ways that video will shape police practices.

According to the press release, the 50-page report, entitled “Worth a Thousand Words: Examining Officer Interference with Civilian Recordings of Police,” is the first of many analyses due on the issue.