Mother of Accused Serial Killer: He’s Not a ‘Monster’ 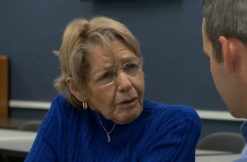 “Todd was not a monster,” Regina Tague said on a 48 Hours report that airs Saturday night. “He’s not even close to it.”

The South Carolina man chained 30-year-old Kala Brown in a metal container after killing her boyfriend Charles Carver, authorities say. He allegedly held her captive from late August until investigators discovered her on Nov. 3. Ugly enough, except police also say that Kohlhepp admitted to 1) an unsolved 2003 quadruple slaying at a motorcycle shop, and 2) the murders of Meghan Leigh McCraw-Coxie and husband Johnny Joe Coxie, who went missing in 2015 (Carver’s and the couple’s bodies were discovered on his property).

Seven alleged murders, and one survivor. Tague said that yes, her son told her that he did it, but he had his reasons.

Why kill Carver? Because Carver “got nasty and got smart-mouthed,” she said. Why chain up Brown? Because Kohlhepp didn’t know what to do with her. He couldn’t turn her loose. She’d go get the police.” And the 2003 quadruple murder in Chesnee, South Carolina? The victims made fun of him for not knowing how to ride a motorcycle, she said.

“He wasn’t doing it for enjoyment,” she said about the killings. “He was doing it because he was mad and he was hurt.”

Spartanburg Sheriff Chuck Wright told CBS that Kohlhepp was “polite and remorseful” on arrest. “I said a prayer with him.”

Kohlhepp was charged on Nov. 4, and according to CBS, his mother claimed that he’ll plead guilty. The plan is to find a lawyer who’ll keep him off death row.