Mother and Daughter Arrested After Getting Married 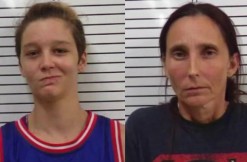 Patricia Spann 43, and her wife Misty, 25, got married in March 2016. They’re also biological mother and daughter, police in Duncan, Oklahoma say. Department of Human Services officials allegedly turned up that detail while investigating children at their home in August.

Misty was raised by a grandparent after her mom lost custody, according to an arrest affidavit obtained by KFOR. They reunited two years ago, and allegedly “hit it off.” Reportedly, Patricia Spann told investigators she thought everything was legal since her name wasn’t on her daughter’s birth certificate.

Both women face an incest charge, and remain locked up in Stephens County Jail in lieu of $10,000 bond. If convicted, they may each spend up to 10 years in prison. A court hearing is scheduled for October.

Records turned up by KTRK revealed that the elder Spann previously married a son in 2008. That marriage was annulled two years later.
–