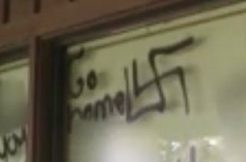 The FBI and police in Fort Smith, Arkansas are investigating after someone vandalized a mosque the anti-Muslim messages as well as a swastika. Statements included “We don’t want you here USA [sic],” “F—k Islam,” “F—k Allah,” and “Go home.”

“That sign says ‘go home.’ He doesn’t know my home is just across the street,” mosque board member Hisham Yasin told KFSM.

Three individuals were caught on surveillance footage, but remain unidentified.

“We do not deserve this as Muslim people living in Fort Smith,” Yashin said. “We’ve never had problems with anybody. Islam is a peaceful religion. We live here and we have a lot of friends of all kinds of religions.”