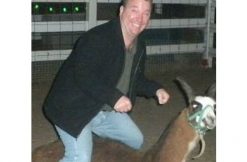 A math teacher in Virginia Beach, Virginia is out of a job after allegedly assaulting a middle school student who apparently wasn’t paying attention in class. On September 16, Daniel Board, 46, allegedly grabbed the boy’s head, wrote “focus” on his forehead, and made the kid leave it there until work was finished.

He now faces a count of simple assault.

A source told WTRK in a Thursday report that Board may have recruited the victim’s classmates to hold down the kid during the incident. Another source, a student, heard second-hand that Board allegedly picked up the victim and flipped him upside down. At the time, the outlet was unable to confirm if these details are part of law enforcement’s official claim.

Eileen Cox, the Chief Media and Communications Officer for Virginia Beach Public Schools, told the Associated Press that Board resigned on Thursday.

Update – October 11, 1:54 p.m.: Police responded to our requests for comment, but we were unable to confirm the allegations in the WTRK story.