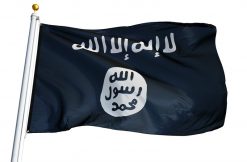 A Maryland man accused of helping a terrorist organization said his pledge to alliance is actually protected by the First Amendment. Free speech.

Mohamed Elshinawy, 30, was arrested in December on federal counts of attempting to provide material support to ISIS; the obstruction of agency proceedings; and making false statements and falsifying or concealing material facts. The Justice Department said ISIS operatives paid him cash, and communicated with them on social media. That relationship escalated when Elshinawy pledged allegiance to the terrorist organization in February 2015, the DOJ press release stated.

Elshinawy stated that ISIL instructed him that if he ever came under surveillance by law enforcement, he should stop whatever activities he was doing in connection with executing an attack. Elshinawy claimed, however, that he never intended to carry out an attack and was only trying to get money from ISIL.

But his lawyers argue that the First Amendment actually protects his pledge and communications with ISIS.

“While Mr. Elshinawy’s alleged pledge and conversations may be considered by some to be hateful and vile, such speech is nevertheless protected under the First Amendment,” they said in a Maryland federal court, according to CBS Baltimore. Generally speaking, the government can only prohibit political speech when it’s a danger to public safety. Which is the fed’s argument, in this case.

Professor Michael Greenberger at the University of Maryland Health and Homeland Security, suggested a likely outcome.

“Having money, opening websites and declaring himself to be sympathetic with ISIL — I think, ultimately, it’s not a winning case and that he will be forced to stand trial,” he told CBS.