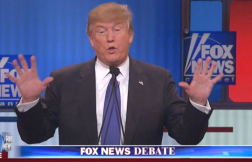 Word just broke that Donald Trump will settle the three lawsuits covering his defunct university. Except he promised that he never would. Look at this March 3 tweet about one of the complaints.

The phony lawsuit against Trump U could have been easily settled by me but I want to go to court. 98% approval rating by students. Easy win

“I don’t settle cases,” he told MSNBC, later adding, “You know what happens? When you start settling lawsuits, everybody sues you.”

Trump University, later known as the Trump Entrepreneur Initiative, went defunct in 2010. Disgruntled students later sued, calling it a scam, and it led to some high-profile spat. Trump complained in February that the federal judge in one California lawsuit, Gonzalo Curiel, who is of Mexican descent, was biased against him on the basis of the president-elect’s controversial immigration policy.

A March report from ThinkProgress discovered that he’d settled at least 13 times between 1990 and 2014. A February report from LawNewz.com found that he’d been named in at least 169 lawsuits.