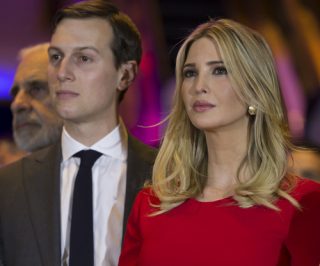 According to several reports, Donald Trump is seriously considering appointing his son-in-law Jared Kushner, who is married to Ivanka Trump, to a position at the White House. Despite the mainstream media’s uproar, it would not be entirely unprecedented for a family member to occupy a key post at the White House.  As historian Doug Wead pointed out, more than 18 sons of presidents served with their fathers in the White House, and 14 daughters-in-law. In fact, William McAdoo, who was married to President Woodrow Wilson‘s daughter Eleanor,  served as Wilison’s Secretary of Treasury.

However, unfortunately for Mr. Trump, times have changed.  After President John F. Kennedy hired his brother, Robert F. Kennedy, as attorney general, a law was passed prohibiting public officials from hiring family members (including son-in-laws) to an agency or office over which he has authority. But like any law, there is gray area. Kushner apparently consulted with a lawyer who believes that by forgoing a salary and putting his investments in a blind trust, he could get around the federal nepotism rules. Sounds like a good theory. However, LawNewz.com reached out to several experts in the field who aren’t buying into it. They told us this legal assessment is just flat out troubling, and if Trump were to appoint Kushner, it would very likely be illegal.

First what the law says:

The law is pretty clear:

The anti-nepotism law is not only about money. It is not only meant to prevent officials from giving relatives a paying job. The law is meant to ensure that the best person is appointed to the job, not the official’s relative.

Kushner can get a federal job but his father-in-law cannot  ‘appoint, employ, promote, advance, or advocate for appointment, employment, promotion, or advancement, in or to a civilian position in the agency in which he is serving or over which he exercises jurisdiction or control any individual who is a relative of the public official.'”

“I read the anti-nepotism statute as imposing a restriction on what Trump can do including who the president can promote. The penalty provision simply clarifies that the person has no legal right to a salary but it doesn’t diminish the first provision of the statute on the President…There are consequences.  There can be a finding of illegality, and there could employment discipline. There is legal argument that the statute shouldn’t apply to appointments at the White House, I don’t think its a compelling one.”

Supporters have pointed to a case involving Hillary Clinton‘s appointment to a health care task force during her husband’s administration. In the decision in that case, two federal appeals court judges said that the federal anti-nepotism law passed in 1967 did not seem to cover appointments to the White House staff.

“We doubt that Congress intended to include the White House or the Executive Office of the President…”So, for example, a President would be barred from appointing his brother as Attorney General, but perhaps not as a White House special assistant. … The anti-nepotism statute, moreover, may well bar appointment only to paid positions in government.”

However, Professor Clark points out that the statement above is considered “dicta,” In other words, the statements are not  key to the holding in the case, and therefore not likely enforceable. In addition, a third judge on the D.C. Circuit panel dissented on that one point.  “People would question the credibility of any effort Kushner was in charge of — not because he was a bad person–but because of his connection to the president. His very appointment is in question and could undermine the credibility of any work he did,” Professor Clark said.

“It would certainly evade the text and letter of the anti-nepotism law, but not the purpose. I think we’re going to see this move a lot in the next few years—many of the most important federal ethics and conflict-of-interest rules either don’t apply to the President, or apply in ways that can be easily avoided. The result is that it’s not illegal for the President to defy these constraints, but it’s eye-opening insofar as the constraints reflect norms of conduct and practice that are there for a whole lot of (very good) reasons.”