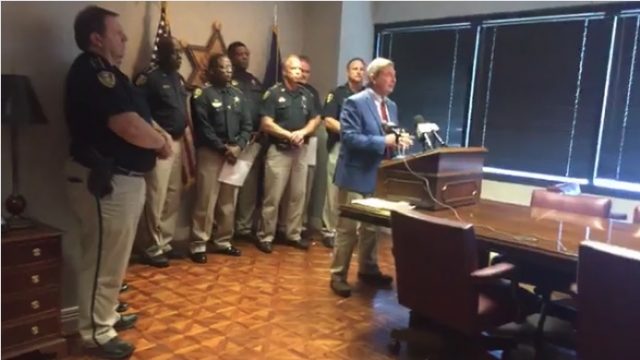 Louisiana will introduce new sentencing and parole reforms beginning November 1 of this year. But not everyone’s happy about that.

His complaints were multiple and varied. That press conference ran for well over 20 minutes. Chief among Prator’s concerns was the loss of labor that the new release guidelines would potentially spell for the state’s prison system.

Slave labor, or prison labor, is expressly allowed by the 13th Amendment to the U.S. Constitution.

Prator was quite upfront about the loss of such labor: it stands to negatively impact his office’s bottom line. He noted that a great deal of the state’s 64 sheriffs fatten their office budgets by housing inmates from other parts of the state and putting them to work.

Prator drew a distinction between “good” and “bad” inmates. The former could be used in work-release programs beneficial to his office budget, while the latter could not. He said:

In addition to the bad ones — in addition to them — they are releasing some good ones that we use every day to wash cars, to change the oil in our cars, to cook in the kitchen — to do all that where we save money… [The good ones are] the ones you can work. That’s the one that you can have pick up trash or work the police programs. But guess what? Those are the ones that they are releasing.

Criminal justice advocates responded by being appalled. The ACLU of Louisiana’s Executive Director Marjorie Esman, said, “Jails are not supposed to incarcerate people just because they need work done – that is slavery. Sheriff Prator’s comments demonstrate a shocking disregard for the very principles on which our justice system is based and raise serious concerns about his department’s approach to public safety.”

In response to the outrage, Prator noted that prison labor–slavery–is actually a long-established practice in the United States. He issued a statement which read, “It is a fact that state inmates serving a hard-labor sentence can be required to work as part of their court-ordered sentence in Louisiana. The term ‘good’ inmates was in reference to state prisoners who are eligible to work but have lesser felony charges compared to others facing release who have criminal histories including murder, domestic violence, and battery.”

During his initial press conference, the Republican sheriff also claimed the reforms were a threat to public safety and ill-considered. While acknowledging the need for reform generally, he said:

It’s been long said that we were the number one leader in the United States for incarcerating criminals in our criminal justice system. Well, let’s face it, somebody’s got to be number one and we’ve got some bad dudes around here. We got some folks that need to be in jail.