Lawyer’s Bumbling Argument Gets Her Laughed Out of the Supreme Court, Literally 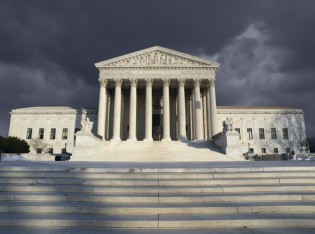 Even the most experienced lawyers often still get nervous before arguing a case before the Supreme Court.  No matter how well you know your case, there is always that fear in the back of your mind that you will blow it and get laughed out of the courtroom.  Unfortunately, that fear apparently became a reality on Wednesday for an attorney arguing an important 4th Amendment case before the nation’s highest.

Attorney Kathryn Keena, an assistant prosecutor in Dakota County, MN, attempted to defend her state’s law that makes it a crime for suspected drunk drivers to refuse to submit to a chemical test.  According to Slate’s Mark Joseph Stern, she failed miserably.  He writes:

I will spare you the bulk of Keena’s outrageously bumbling performance, but I must share this closing colloquy. When [Justice Sonya Sotomayor] gives Keena a brutally frank summary of her untenable position, Keena does not respond.

“Justice Sotomayor is assuming that you’re going to lose,” [Justice Samuel Alito] quips, filling the silence. “So she wants to know what your reaction is to that.”

All the justices laugh hysterically, including Sotomayor, who looks down the bench at Alito with a fond grin. Keena stays absolutely stone-faced.

Yet, despite her apparent meltdown in the courtroom, Keena was amazingly still hopeful that the Court would side with her argument.

In an interview with the Star Tribune after oral argument, Keena told the paper that she thought the justices would at least allow state’s to keep in place penalties for a driver’s refusal to submit to a warrantless chemical breath test.  If not, she said it would make it more difficult for state’s to prosecute drunk driving cases.

“We’re finding in some situations that a lot of these arrests are occurring at times that judges are sleeping and it’s really difficult to try and get a search warrant,” Keena said. “The judges talk about getting warrants in 15 minutes and that’s not the case yet in Minnesota.”

Stern, however, does not necessarily agree with Keena’s optimism.

“With [this case], the court has an opportunity to impose sensible limits on [the] troubling practice [of state’s forcing motorists to submit to warrantless chemical tests],” Stern wrote.  “On Wednesday, Keena … tried to stand in the way of reform. Thanks in part to [her] own ineptitude, [she] almost certainly failed.”