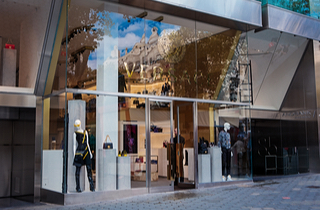 Christopher Sampino, a former employee at a Versace store, alleges in a 30 page lawsuit that, among other things, the chain had instituted a code to use when there was a black customer in the store. Sampino is suing on various employment-relation counts including  wrongful termination as well as racial discrimination and harassment.

Sampino says that he began working at the Pleasanton, California Versace USA store when, during his second shift, a training manager asked him a question: Did he know about the “D410 Code?” Here’s how the the complaint explains the code:

Sampino says that he responded by asking “You know that I’m African American?” He added that the manager “seemed surprised” by that and as a result, he wasn’t properly trained afterwards. Sampino was fired on October 1st. The complaint says that he was told it had nothing to do with his “performance,” but instead that he didn’t “understand luxury” or “know the luxury life” and hadn’t “lived the luxury life.” Sampino further adds that he was asked to quit since “that would make the paperwork easier.”

Versace has answered to the complaint and had the case moved the federal court, but the company has not yet answered Sampino’s specific allegations.

Versace believes strongly in equal opportunity, as an employer and a retailer. We do not tolerate discrimination on the basis of race, national origin or any other characteristic protected by our civil rights laws. We have denied the allegations in this suit, and we will not comment further concerning pending litigation.