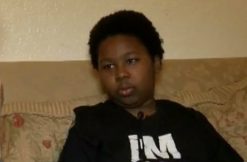 He claimed a teacher yelled at him during the September incident, and told him to leave.

The outlet reached out to Liberty Middle School about this, and a spokesperson reportedly admitted that the teacher didn’t know that Hillsborough County School District policy allowed Dawson’s behavior, and this individual was set straight in a talk with the principal. There remains some discrepancies between Dawson’s story and the school’s, though. He said he was admonished three times. They said it only happened once.

What’s the legal angle at play here? Well, as WFLA reporter Paul Mueller pointed out, the county policy allows students to refrain from participating in the Pledge of Allegiance as long as they don’t stop other kids from doing so.

This rule obviously reflects the 1943 Supreme Court ruling for West Virginia Board of Education v. Barnette. They voted 6-3 on behalf of several students, all of whom were Jehovah’s Witnesses refusing to stand for the pledge on religious grounds. Justice Robert H. Jackson, who wrote the opinion, didn’t believe that the government, including school officials, was constitutionally allowed to make people say things they don’t mean:

There are some minor complications though. Florida law also requires students to get written permission from parents if they want to abstain from the pledge. Professor Catherine J. Ross, a First Amendment professor at George Washington University Law School and author of Lessons in Censorship: How Schools and Courts Subvert Students’ First Amendment Rights, told Law Newz in September that this is the only statute of its kind nationwide. The law has never faced the Supreme Court, but it was upheld in lower courts because it technically treats the matter as an issue of parental authority granted by the state legislature. In other words, this law operates under the assumption that parents would make their kids stand for the national anthem and the Pledge of Allegiance. She added, however, that students who lack exemptions are still protected under the First Amendment.

This may end up being a moot point since Dawson’s aunt told WFLA that she supported his decision (his parents were not mentioned in the story). Nonetheless, it’s worth mentioning.

Besides that point, the hypothetical Dawson lawsuit would likely present some different circumstances from Barnette. His school seems to have corrected any purported wrongdoing without the need for legal action. In the case of the Barnette kids, district officials expelled Jehovah’s Witness kids for their noncompliance with the pledge