Trump Isn’t Going To Sue His Sexual Assault Accusers, and Here’s Why 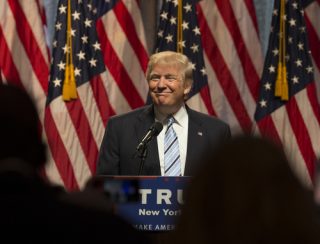 Well, he’s at it again. Another day, another empty attempt to intimidate women.   This time, Donald Trump is promising to put his sizable legal dollars behind a defamation lawsuit against the women who have accused him of sexual assault.  At a rally in Gettysburg, Pennsylvania on Saturday, Trump declared, “all of these liars will be sued after the election is over.”

On the one hand, it’s nice to see that Trump is getting acquainted with basic legal logic. As I mentioned in my earlier piece analyzing the merits (none exist) of the lawsuit Trump avowed against the New York Times, it would have made little sense to sue media outlets for publishing the sexual assault allegations against him without also suing the actual women who made those allegations in the first place. Perhaps the threats Trump leveled on Saturday were a sort of tying up of loose ends.

If Trump did choose to litigate, it just wouldn’t work. For starters, his lawyers would probably explain to him that naming “all” the women who have accused him of sexual impropriety is ridiculous. This isn’t a class-action lawsuit. These are eleven separate women, each of whom has made an individual claim against Trump. The allegations may be eerily similar to one another (to say nothing of their striking resemblance to Trump’s own words on the Access Hollywood tape), but they are totally different in terms of time, place, circumstance, and details. Eleven different lawsuits, in several different jurisdictions, with different factual bases, and different sets of pleadings would all need to be drafted, filed, and litigated. If Trump had any chance of winning, these lawsuits alone could keep an entire law firm in business for a while.

But he has no chance of winning. And I’m not speaking of the obvious reason why that would be the case – because the women are telling the truth. I couldn’t possibly know whether these women are telling the truth. But even if they were flat-out lying, it would be almost impossible for Trump to win against them.  A lawsuit leveled at Jessica Leeds, Rachel Crooks, Natasha Stoynoff, Mindy McGillivray, Cassandra Searles, Temple Taggart, Kristin Anderson, Summer Zervos, Cathy Heller, Mariah Billado, Jill Harth, Karena Virginia, or Jessica Drake would likely be one for “slander” (that’s the spoken form of defamation. As a plaintiff, Donald Trump would bear the burden of proving by clear and convincing evidence that the defendant woman said something about him that was untrue. And right there, in that benign-sounding legal term – burden of proof – lies the death of any Trump v. Woman slander lawsuit. Proving anything by clear and convincing evidence is pretty difficult. But proving that something didn’t happen is basically hopeless. I mean maybe a plaintiff could prove that a telephone call wasn’t made, or that money wasn’t deposited – something for which a record would be generated — but how would anyone prove that a sexual assault didn’t happen?

Last week, when I first discussed Trump’s potential defamation claims with Lin Wood against The New York Times,  a top defamation lawyer who has represented many high-profile plaintiffs, he sounded like he wouldn’t touch such a lawsuit with a ten-foot pole:

Law students across the country learn a clever axiom early in their legal studies: “absence of evidence is not evidence of absence.” The fact that a Trump accuser lacks proof that he assaulted her does not, in itself, prove that she is lying. In a slander lawsuit, Trump would be expected to provide objective proof that exonerates him. It’s not so much that Donald Trump doesn’t have that necessary evidence; it’s that no such evidence exists. That’s the problem with sex and the law. There’s not usually a lot of corroborative evidence about how one person touched another. That reality is the unfortunate reason why so many rape cases go unprosecuted; at least in this situation, all it’s doing is thwarting an unnecessary lawsuit threatened by an immature, litigious, privileged, egomaniac.

And the lack of evidence isn’t even the only insurmountable obstacle.  Even if, in some magical alter-reality, Donald Trump could objectively prove that any of these women had been lying, he’d still have to prove that her lie hurt his reputation.

The concept that Trump’s precious, innocent reputation could be tarnished by the suggestion that he’d groped a woman without her consent is so laughable as to almost defy discussion. But since David McCraw, counsel for The New York Times explained it so eloquently in his response to Trump’s legal threats, I’ll use his words:

“The essence of a libel claim, of course, is the protection of one’s reputation. Mr. Trump has bragged about his non-consensual touching of women. He has bragged about intruding on beauty pageant contestants in their dressing room. He has acquiesced to a radio host’s request to discuss Mr. Trump’s own daughter as a “piece of ass.”

“Nothing in our article has had the slightest effect on the reputation that Mr. Trump, through his own words and actions, has already created for himself.”

I can’t imagine that any serious lawyer would put his or her own professional reputation on the line for to actually file a lawsuit like the one Trump promised at the Pennsylvania rally on Saturday. A plaintiff’s lawyer risks violating ethical guidelines and incurring sanctions for even filing a frivolous lawsuit. On top of that, it would surely expose Trump to some embarrassing and painful discovery. While I think Trump is correct to predict that he’ll have more time on his hands “after the election is over,” I’m guessing we won’t be seeing lawsuits against any of these women any time soon.